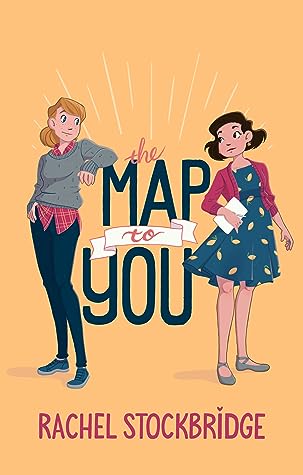 **I got this ARC from NetGalley in exchange for an honest review. Thank you so much for giving me a chance to read this book! All the quotes mentioned in my review are from the ARC and might not be in the final version of the book.**

Kinsey allowed herself a slight smolder as she leaned in another inch. “What would you do if I was?”
“I – What?” Sasha stammered, her gaze dropping to Kinsey’s lips.

When I requested the ARC for this book I wanted to read a fluffy and light f/f romance and the cover of the book looked like it would be exactly the kind of book I was searching for. So the big question is: Did I get fluffy and light-hearted? Well, yes , to some extent I did, but I also got some serious topics I didn’t expect and this certainly made the book an even more interesting read. At least for me it did. I always enjoy it if bookish characters have a background story and both characters; Kinsey as well as Sasha delivered on that front. Both in a very different manner, but still in a way that added quite some substance to the story.

”She just had to focus. Stay in control. Get Kinsey to Charlotte, stop being so damn weird, and maybe she could stop things from deteriorating further. Or at least refrain from grabbing Kinsey by the waist and kissing her as best she knew how.”

What I really loved about this book was the flirty and easy banter between the two MCs. It’s so rare to see an f/f couple flirt like that on page and I personally lived and breathed for it. Honestly, there could have been even more of those scenes and I’d have been an even happier camper. The author made sure to give us the right mixture of push and pull though so I can’t really complain about it. Another thing I liked was the fact that Kinsey and Sasha were friends long before they became a thing and since the friends-to-lovers trope is still so rare in literature I really appreciated that the author went for it. It was extremely wholesome to see a couple that knew each other’s habits and quirks and had absolutely no problems to handle them. =)

”The Hans were everything Sasha always wished her own family could have been. Everything she’d given up on. That feeling of belonging. Of safety. Of easy, unconditional love. She’d stopped wishing for it so long ago she’d forgotten how much she’d wanted it.”

But of course not everything in the book was sunshine and rainbows and the darker and serious topics were a constant presence that wove like a red thread through the entire storyline. Sasha’s bad experiences made her the person she was though and they made her character even more real and complex. Whenever Sasha’s past was mentioned I felt really sad for her and I think no kid should ever have to suffer the way she did. Of course it was also very frustrating to see how she tried to shut everything out and sometimes I became as exasperated with her as Kinsey. There were really some moments I just wanted to make her listen so that she’d finally understand, yet at the same time I totally got where she was coming from. With a past like that it’s not easy to trust others and Sasha’s constant struggle to open up and to fight against her inner demons wasn’t only comprehensible but also palpable throughout the entire book.

All told I really enjoyed reading “The Map to You”! I didn’t expect the book to have such heavy topics and some parts were really stressful to read, the strong friendships and the two MCs did a great job at managing to balance the serious topics though. So if you want to read a book with a cute love story that also has some rough edges to it this one might be the perfect fit for you. 😉

Ein Gedanke zu „Review: The Map to You (Rachel Stockbridge)“