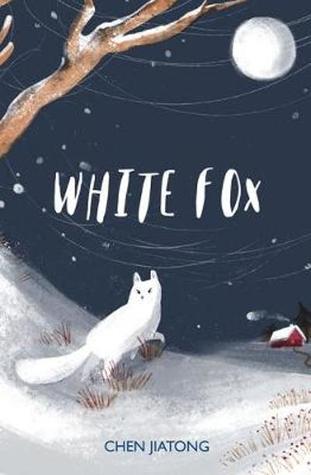 ”Don’t hate all humans because of what happened to us. There are both good and evil humans: you need to see that for yourself.”

Okay, I’ll be honest here: One of the main reasons why I decided to read this book was the white fox on the cover. =) As you all know I love foxes and they are my spiritual animal so when I saw a book that didn’t only have a fox on the cover but also had the word in the title I just couldn’t resist! And I’m so glad I picked up “White Fox” because it was exactly what I needed. I’ve been constantly fighting against a work- and life-induced reading slump those last couple of months and sometimes you just need a short and enjoyable middle grade book to get away from reality. Well, at least for a little while so you can recharge your batteries and this book was exactly that.

”For the first time, he wondered if he really wanted to be a human at all. How could they be so heartless?”

So what is “White Fox” about? Basically it’s a book about Dilah the fox who wants to become human after his parents are killed by a hunter. With her last breath his mother hands him a mysterious moonstone that is supposed to guide him to a place where he can become human. Since nothing holds him anymore Dilah starts his journey with the moonstone but he isn’t the only fox that wants to be human and soon he’s followed by a pack of blue foxes that are led by their ruthless leader Carl. On his way Dilah meets humans and other animals and forms many friendships while he tries to solve the mystery of the moonstone.

”Why wouldn’t she give him a chance? He hadn’t done anything wrong. He liked Ankel and he happened to be a fox – what was wrong with that?”

On the one hand this was a very sad story. There is a lot loss and Dilah isn’t always welcome at the places he visits. Many of the animals have prejudices against him and Dilah doesn’t understand why they can’t see past their fear. I really loved this aspect of the book because it doesn’t only address the countless prejudices we have to face in our lives but also provides us with solutions to fight against them. Of course it doesn’t always work, but despite all odds Dilah always makes friends among the different animals because they refuse to be led by their own fear and prejudices. Sometimes the author allows the characters to voice it very clearly and I really loved this about the book.

”She’s done nothing wrong! What’s wrong is your prejudice, your fear of humans and your own cowardice!”

I absolutely adored Ankel the weasel and his friendship with Dilah was amazing! Little Bean was a very precious character as well and I felt so sorry for him but at the same time I was glad that he helped Ankel and Dilah when no one else would have. Seriously, despite all the sad parts this was such a lovely and heart-warming story and the beautiful illustrations by Viola Wang only made this an even more enjoyable read.

All told this was a really great book and the strong bonds and the friendships between the characters were amazing! Since it was a short read I was through it in no time, but I really appreciated all the life-lessons that were taught in here. =) The ending was pretty open and as it seems there’s actually going to be a second book?! I’ll definitely make sure to watch out for it because I’m sure at some point of my life it might once again turn out to be exactly what I need. 😉