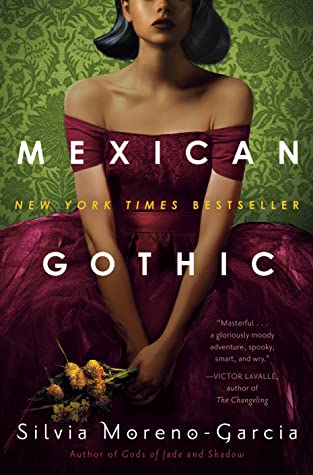 ”I am Catalina Taboada. CATALINA. Cata, Cata come out to play. I miss Noemi. I pray I’ll see you again. You must come for me, Noemi. You have to save me. I cannot save myself as much as I wish to, I am bound, threads like iron through my mind and my skin and it’s there.”

If I’d have to describe “Mexican Gothic” with just one sentence I’d say: “It was fun.” Fortunately or unfortunately (it always depends on whether you like my reviews or not) we all know that I’m incapable of keeping my reviews short and simple so as always you’ll get a lot more from me than just one sentence. ;-P This said: What is the book about? Well, if you break it down to the basics “Mexican Gothic” is about Noemí Taboada who is sent to her cousins’ house in order to find out what is wrong with her. After marrying an English man and moving into his house named High Place, Catalina wrote a very disturbing letter and her father entrusts Noemi with taking care of the matter. Or in short he wants her to find out if Catalina needs the care of a psychologist or not.

”She thought that men such as her father could be stern and men could be cold like Virgil, but women needed to be liked or they’d be in trouble. A woman who is not liked is a bitch, and a bitch can hardly do anything: all avenues are closed to her.”

Once Noemi arrives at High Place it seems like her cousin is getting over a heavy illness and that everything is going to be okay, well at least at the beginning. The longer she stays the more crazy things happen. Haunted by reoccurring nightmares Noemi soon realizes that her cousin’s letter might not have been written while she experienced a psychotic episode but actually might turn out to be the truth. Confined to the dark halls of High Place she sees the well maintained facade of the Doyle family crumble and the secrets she discovers behind the walls are enough to unnerve even the bravest socialite.

”A woman’s function is to preserve the family line. The children, well, Virgil is the only one left, but she did her duty and she did it well.”

I can’t even tell you how much I hated Howard Doyle, the patriarch of the family. He was such a horrible and vile man and all his talk about Eugenics, superior races and the roles of women made me sick to my stomach. Not that his son Virgil was any better. The more I saw of his true nature, the more I detested him. Florence, the only female Doyle member, was horrible as well and I loathed her so much for bending to Howard’s and Virgil’s will. This woman was mean and cruel and had no backbone to speak of. And Catalina? Well, her poor cousin barely seems to be able to get out of bed so Noemi is on her own and has to fight for both of them.

She thought Howard looked like an insect and Florence was an insectivorous plant. But Virgil Doyle, he was a carnivore, high up the food chain.
“Florence is right. You deserve to be slapped and taught a few lessons,” he muttered.
“If anyone is slapped in this room, I assure you, it won’t be me.”

The only family member I really liked was precious and frail Francis Doyle. Florence’s son and the only person that truly seemed to care about Noemi’s well-being. I couldn’t help but like Francis but I also felt kind of guilty for trusting him? *lol* I mean at a place where nothing is as it seems and where you find enemies at every corner, would you trust a nice and gentle soul? I for my part had a really strong trust problem when it came to Francis but at the same time, just like Noemi, I wanted to be able to rely on at least one person in this creepy house. XD

”You are right to think that I was grown like an orchid. Carefully manufactured, carefully reared. I am, yes, like an orchid. Accustomed to a certain climate, a certain amount of light and heat. I’ve been fashioned for a single end. A fish can’t breathe out of water. I belong with the family.”

As for our MC Noemi Taboada: I absolutely loved and adored her! This woman is fierce and she never backed down! I really enjoyed to follow her journey and to discover the secrets of the old house alongside her. This woman has guts and I was very glad she gave the Doyle family a run for their money and didn’t allow them to intimidate her. The Doyle’s, especially the male family members, definitely needed someone to reprimand them so I was happy about every word that Noemi uttered with her sharp tongue. *lol*

”This time his gaze lingered on her for one long minute before, skittish, he stepped back and rounded the table again, returning to his original position. A bundle of nerves is what he was. A heart, raw and bleeding, she thought, and the image lingered in her mind.”

All told “Mexican Gothic” was a really interesting horror book and I enjoyed it even though I’m a scaredy fox and usually don’t read in the genre of horror. At least not all too often. 😉 Still, I loved the atmosphere of High Place, the cemetery next to it, the impenetrable fog surrounding the old house, it’s cold and cruel residents and its desolate walls harbouring dark secrets. If you like books that are mysterious and not all too creepy, books that give you a slightly gross vibe. Well, then I’m sure you’ll enjoy this one too.