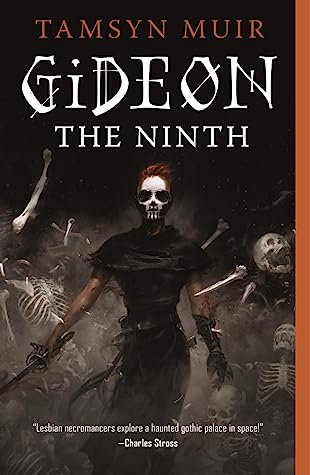 „Oh, I have hurt your heart,“ she said.
Gideon kept it absolutely level. „I boohooed for hours.“
„It won’t be the last time I make you weep.“

Okay, so “Gideon the Ninth” is definitely a book I have troubles to review because 1.) It’s unlike any other book I ever read and 2.) Most of the time I was super confused and really had to make an effort to be able to follow the plotline. XD Like seriously, all those different names and the houses plus the mere fact that most of the characters went by 3 or 4 different names/nicknames made this really tough to read. I think due to this the writing style was very hard to get into at first and it took me a little while until I could connect with the story. (I mean we have 9 Houses after all) Not to mention Tamsyn Muir’s unique writing style in general. Sometimes I had to read a sentence thrice to actually understand what was happening. (Maybe it was just my tired brain though, so *lol*) Also there were a lot of scenes when you read the scene but afterwards you’re none the wiser. If that makes sense?!

„Oh, this is boring,“ Gideon had said in disappointment. „I wanted one with a skull puking another, smaller skull, and other skulls flying all around. But tasteful, you know?“

As for the premise of the book: There was barely any action happening in space, it was basically limited to two planets and not actually in space and the lesbian representation, was there but vague and not very pronounced. I mean we get a couple of Gideon’s dirty thoughts but they are almost chaste in comparison to what I usually read. I guess my mind would have been way dirtier than Gideon’s, but let’s not go down that road and focus on the book instead. ;-P What “Gideon the Ninth” definitely had a lot of was necromancy and suspense! I kinda loved the murder mystery vibe we got in here and all the interesting details about the necromantic world and how it works.

”If you want to know what I think … I think that you’re a cavalier worthy of a Lyctor. I want to see that, what you’d become. I wonder if the Reverend Daughter even knows what she has in you?”

If I got it right there are nine houses and every one of them is specialized on some area of necromancy which was very intriguing to me. Also the description of how it works and what you have to do in order to move dead corpses etc. was super interesting. You could tell Tamsyn Muir put a lot of thought and effort into her world building and even though it was sometimes very confusing I really liked that love for science and detail. Because yes, if you break it down to the basics necromancy seems to be a science and I loved how Muir made sure to convey that to her readers.

„I must no longer accept,“ she said slowly, „being a stranger to you.“
„Whoa, whoa, whoa,“ said Gideon, sudden sweat prickling the back of her neck, „yes you can, you once told me to dig myself an ice grave. Stop before this gets weird.“

Of course Gideon and Harrow are the main characters of the book and it’s told from Gideon’s POV, which made Harrow quite a mysterious character and added a lot to the atmosphere. I was such a sucker for their interactions because Harrow always seems to be annoyed by everything Gideon does and Gideon just doesn’t get her. Sometimes they were on the same page though and whenever that happened it was either a lot of fun or very serious business. It was really nice to see how they developed from enemies-to-friends and I’m using that description on purpose because this certainly wasn’t your typical enemies-to-lovers arc and I’m not even sure what they would have defined themselves as by the end of the book. *lol* We’ll just leave it at that.

”Well, all I can say is thank the Tomb that nobody knows you’re not really one of ours. If I didn’t know that, I’d be saying that you were Matthias Nonius come again or something equally saccharine.”
„Harrow,“ said Gideon, finding her tongue, „don’t say these things to me. I still have a million reasons to be mad at you. It’s hard to do that and worry that you got brain injured.“
„I’m merely saying you’re an incredible swordswoman,“ said the necromancer briskly. „You’re still a dreadful human being.“
„Okay, cool, thanks,“ said Gideon. „Damage done though.“

When it comes to the other characters in the book I’ve to say that Palamedes and Camilla (6th House) as well as Magnus and Abigail (5th House) were my favourites. Even though I’ve to admit that Palamedes and Camilla kinda won the crown for me. Camilla was such a badass cavalier and an amazing fighter and Palamedes won me over with his calm, gentle, compassionate and inquiring nature. I love that man! Period! *lol* Go find yourself a Palamedes. ;-P Anyway, back on track! The coolest duo in this book were definitely Gideon and Harrow though! When they set their minds on something those two rocked the show and I really want to see more of them?! Please, can we have more of them Tamsyn Muir?!

„I’m not running, Harrow!“
“Of course we’re not running,” said Harrowhark disdainfully. “I said a necromancer alone. I have you. We bring hell.”

All told “Gideon the Ninth” was unlike any other book I ever read and therefore very unique. The action sequences and especially the name dropping were sometimes really confusing, but in general I enjoyed to read this and had a great time. The tension and distrust between the different necromancers and the mystery element that ran like a golden thread through the entire book added a nice touch to the atmosphere as well and some of the plot twists were actually really surprising. I don’t know about you, but I’m looking forward to read book two! 😉