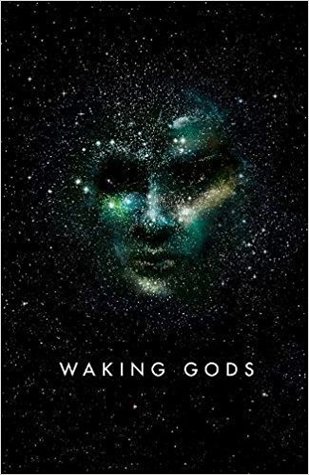 ”If there’s one thing we should have learned by now, it’s that we’re not the greatest thing in the universe, certainly not the smartest. Seems logical there’d be a great many things in it we can’t comprehend.“

Do you remember my sceptical face when I read the blurb of “Sleeping Giants” and was confused by the “enormous, ornate metal hand”? Yeah, it’s been a long while but after almost a year I finally managed to get a copy of “Waking Gods” into my greedy hands and I was very happy to be able to continue this crazy journey. And boy, let me tell you this: It’s been another freaky ride. *lol* The story of the second book starts about 10 years after the first book ended so we have a lot of things we need to catch up to before the plot actually picks up and thickens again.

”I’m a soldier, so if they tell me to walk up behind it and kick it in the butt, I will. But if we can avoid the whole me and Vincent dying thing, you know … that’d be good.”

But first things first: Of course our book starts with a visit from “Mr. Smith” because a huge giant figure similar to Themis suddenly appears right smack in the middle of London and kind of looms over the city. No one knows where it came from or what it wants but the mere presence of the figure already seems to be quite threatening and while the governments are busy thinking about how to deal with this new challenge, there appear more and more giant figures all over the world. So the inevitable happens: After 10 years of training and sort of parading through the world with Themis Kara and Vincent are brought back into the game and are probably the only hope for humankind.

Haha! Yeah, they probably shouldn’t have sent Kara to do the job, because this girl is as fierce and rebellious as ever but oh well; thankfully Vincent is the voice of reason and knows how to talk her down. ;-P Not that diplomacy would have helped with the things that were coming their way, but that’s a story for another day. I really enjoyed that we got to see a lot of the cast from the first book and Mr. Smith, Dr. Franklin and Eugene Govender were all a part of “Waking Gods” as well. Unfortunately the same can be said about the people we didn’t like. Yes. Mr. Mitchell and Alyssa are once again a part of this book too. >_< And I still don’t like them, especially Alyssa. Urgh, that woman!

„I may believe in God, but I’m at war with Him. I’m a scientist, I try to answer questions, one at a time, so there’s a little less room for Him as the answer. I plant my flag, and inch by inch, I take away His kingdom.“

Anyway! What I really loved was that we didn’t only get to see the huge problem of the robots and the threat they presented for humanity but that we also got to see more of the character’s personal lives. They are all human, they make mistakes and no matter how mysterious they are, they still had a past and a background story that was worth telling. Honestly, those background stories were one of the best things about this book, at least for me, because I was almost speechless when they were revealed. Not to mention all the plot twists that always caught me off-guard. This mixed with a little bit of science, theoretical discussions and the omnipresent questions of “What does humanity stand for?” and “Is it worth to be saved?” made this a really intriguing read.

”I came to realize that good and evil were out of my reach, that time was the only thing I had any control over. I could buy time, create intervals. I could not truly make the world a better place, but I could make part of it a better place for a short while. I came to peace with that.“

All told “Waking Gods” was at least as mind-boggling and startling as its predecessor and I can’t wait to pick up the last and final book. I’m sure Sylvain Neuvel has still a lot in store for us and I’ve no doubt the plot twists in book three will throw me for a loop as well. I love that I can never anticipate what will happen next and this makes this series such an interesting read. Highly recommended for everyone who enjoys to be kept on their toes. 😉