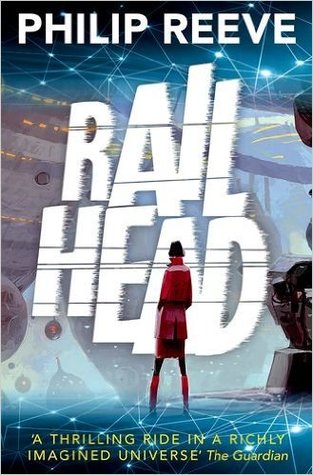 ”The trouble with friends was, sooner or later he’d have to tell them about Ma’s troubles and his life on Bridge Street, and those were sadnesses which he preferred to hold close and secret. It fitted the image he had of himself, too – the lone thief, all stray-cat-cool, walking solitary down some midnight street.”

So the first thing I have to say about “Railhead” is that it’s unlike any other book I’ve ever read, which is pretty rare and definitely an accomplishment. I mean I read a lot of books and to find something unique that still surprises me is like winning the lottery jackpot. But the world Philip Reeve built? It’s amazing! I don’t know why so many people put this into the genre of “young adult” because I think it’s actually middle grade, but I guess this is a discussion for another day. 😉 Right now I just want to speak about the awesome world Reeve built and how cool it was to dive into it.

I absolutely loved the idea of portals and railways that exist between different worlds and I adored the concept of sentient locos! Like OMG! This is ingenious! Every single loco that was mentioned in this book had its own voice and I loved to discover how different they were. They were very human and some of them even were in love like the “Time of Gifts” and “The Wildfire”.

”They tease each other, and sing, and talk about old times, other worlds they’ve seen. I don’t think they know I’m listening. It’s sweet. People say they’re twins, but they aren’t. They’re lovers. They come from different engine shops. They met on the Network. And they love each other so much…”

Okay, go ahead, tell me that feeling and speaking locomotives aren’t one of the coolest things ever. *lol* Also there are motoriks in this world as well and they are basically very human looking robots (I suppose you could say they are humanoids). One of my favourite characters was Flex! She/He wasn’t just a really sweet character but also some sort of gender fluid motorik and if you think I’m biased now: Well, yes, I am. XD I can’t help it though, I mean how often do you find gender fluid reps in a book and how many of them are cute and talented motoriks?

”Why do you keep switching?” he asked. “Male to female, female to male…”
Flex looked up at him and smiled. “Wouldn’t you, if you could?”

And if that isn’t enough to persuade you to read this book: We also have Hive Monks which are basically bodies that are made of a million bugs and somehow gain a conscience once they are enough to form a body. I know a lot of people might be repelled or horrified by the mere idea of creatures like that but for me they added a really nice sci-fi element to the story and I actually found it very interesting to read about them. They acted very human and Nova the motorik girl that helped Zen with every task that was given to him by Raven was an amazing character as well.

”Her face was very beautiful, he thought. He hadn’t been sure before, but he was now. The mind that lived behind it made it beautiful, the same way that the flame inside a lantern makes the lantern beautiful.“

Truth be told, the slow romance that formed between Nova and Zen was probably one of the most intriguing things about “Railhead”. Nova is a motorik but if you compare her to the other human beings that appear in this book she seems to be the most human of them all. She is compassionate, she is kind and she feels more deeply than most of the people that made an appearance in this book. Which brings me right to Raven. I can’t say I liked him, but I kinda understood where he came from and what he wanted to achieve. The way he went about it was wrong though and I think I’ll never forgive him for what he did to Nova.

”Things need shaking up, Zen. Everything keeps repeating itself, century after century. Empires rise up and grow old, and there’s always some new would-be Emperor waiting in the wings to take their turn. Dark ages come and go. People are born and people die. It’s so pointless. The Guardians mean well, but they have shunted the whole human race onto a branch line of history, and we keep trundling round in circles. It’s time someone changed that.”

Malik, Zen’s and Raven’s antagonist was a super interesting character as well. I loved to find out more about him and his complexity added a lot to the storyline. I mean he’s a man on a mission and he has his own codex of right and wrong. He is confident and knows exactly where he stands and he stands firm in his convictions. I had to admire that about him and I kind of hope that he’ll make an appearance in book two. (Him and his husband, because wow, that tidbit of information was just mentioned in passing and I loved it!!) As for Zen Sterling: He made for an interesting MC and even though I didn’t agree with all of his actions I was still able to see the good in him. In fact Zen is a very complicated character too and I can’t wait to find out how he’s going to change in book two. There is a lot of potential for character growth and I’m so here for it. 😉

“Railhead” was such an amazing read and I enjoyed it immensely. Mind you this is someone speaking who isn’t even moderately close to the age of middle grade. *lol* This however didn’t take away any of my enjoyment and I still loved to dive into this world. So if you want something different, if you want sci-fi and unique locos that travel through worlds and wormholes, if you want a young hero and his amazing side-kicks. Well, then this book is for you! 😉