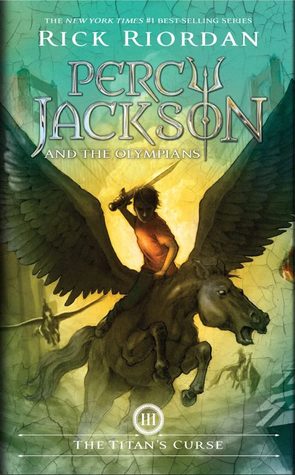 And this kind of settles in which direction this third book is heading. If you’re already familiar with Percy Jackson (which I’m pretty certain you are, because otherwise you wouldn’t read this review, right? *lol*) you know that the first two books were fun and had a lot of jokes in them. The third one? Not so much. Whilst it’s true that “The Titan’s Curse” was very entertaining and full of Uncle Rick’s trademark adventures I still have to point out that it was way more serious than its predecessors.

Yes, we still have Percy’s funny remarks but just like the Harry Potter series this series is growing as well. The characters get older and their quests get more dangerous and grim. The stakes are higher and our characters are forced to realize that not everyone can be saved by a hero. For instance we’re barely a few chapters into the book when Annabeth disappears with the enemy. There’s no trace of her left and for all they know she even might be dead. Not that Percy would consider such an outcome! He has to save Annabeth because he just knows that she’s still alive! 😉 So what to do when you’re stranded on a cliff? Right, you call for the sun gods help to hitch a ride. XD

I totally agree with Thalia btw! *lol* I loved that Apollo was a recurring part of this book and I can’t wait to read his series! He seems to be such a fun guy and I was more than just intrigued by his character. ❤ Artemis and her Hunters were a great addition to the cast as well, and the Di Angelo twins? I think we’ll read more about them in future books! 😉 I’m really looking forward to this because I already like little Nico and took him to my heart! The true star of this story is Bessie the cow serpent though and if you don’t know who that is you better read the book and find out! *lol*

”This is why I don’t use mortals,” Luke said. “They are unreliable.”
“They are weak-minded, easily bought, and violent,” the General said. “I love them.”

But of course there need to be real enemies in “The Titan’s Curse” as well and this time around they are pretty decent and smart. Next to Luke we have to face the General and this adversary is as dangerous and cunning as they come. Knowing my myths I wasn’t surprised about the story behind the man, but as a kid I probably would have been shocked. *lol*

Anyway, there was a short appearance of a character that helped Percy and I’ve to admit that I’m pretty curious about Rachel Elizabeth Dare. I can’t help but wonder if she’ll make an appearance in later books. The way she was introduced seemed to be very significant and Uncle Rick usually has a reason if he does things like that so… yeah. ;-P

”Seven hundred feet tall,” I said. “Built in the 1930s.”
“Five million cubic acres of water,” Thalia said.
Grover sighed. “Largest construction project in the United States.”
Zoe stared at us. “How do you know all that?”
“Annabeth,” I said. “She liked architecture.”
“She was nuts about monuments,” Thalia said.
“Spouted facts all the time.” Grover sniffled. “So annoying.”
“I wish she were here,” I said.

This moment was so great because it showed how much those characters love and care about each other even if they occasionally get on each other’s nerves. *lol* It made me sad that Annabeth wasn’t a big part of this story but considering the main plot it was okay that she only played a minor role. Let’s just hope she’ll play a bigger part in “The Battle of the Labyrinth” again. =) And last but not least I want to say how much I love Percy! XD

”Fight us,” I said. “And let’s see.”
“Have the gods taught you nothing? An immortal does not fight a mere mortal directly. It is beneath our dignity. I will have Luke crush you instead.”
“So you’re another coward,” I said.

Haha! Is it just me or is there actually no god he didn’t challenge already? XD No matter which goddess or god appears, Percy seems to be ready to fight them all and I love it! ;-P I think by now he’s so pissed that he just doesn’t care anymore. At this point he might even take them on for just looking at him the wrong way. *lol* I can’t help but wonder what this means for the next two books and I’m so ready to read “The Battle of the Labyrinth”!!! Next one, please! XD 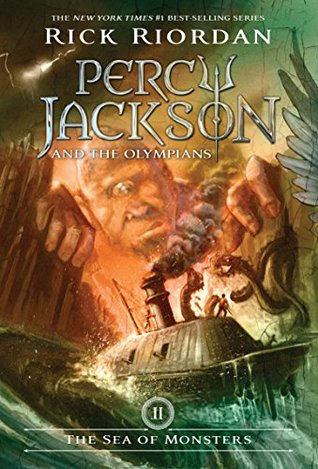 ”We did all the standard numbers: ‘Down by the Aegean´, ´I Am My Own Great-Great-Great-Great-Grandpa´, ´This Land is Mino’s Land´. The bonfire was enchanted, so the louder you sang, the higher it rose, changing colour and heat with the mood of the crowd.”

Sounds like a really nice night at Camp Halfblood, right? I mean who wouldn’t want to sing “This Land is Mino’s Land”? (On a side-note: Uncle Rick if you read this, can I please have the lyrics for those songs? *lol* I’d love to read them!!!) Unfortunately not everything is as it seems, and Percy isn’t only plagued by strange dreams of his best friend wearing a bridal gown (Hey there Grover, you’re looking good! ;-P) but also by a few ancient monsters that apparently feel a need to attack his home.

But worry not! We all know that for every problem there is a solution and of course Annabeth already figured it out. I guess to have a daughter of Athena at your side really comes in handy sometimes. 😉 Especially if you’re a very practical and down-to-earth person like Percy.

See, very practical indeed. *lol* Otherwise he probably would have never figured out that you don’t only get messy but also get a “Golden Fleece” as well. (Of course only if your sheep actually happens to be a golden sheep, but that’s another story for another day. ;-P) Anyway, moving on. Camp Halfblood is in trouble and the only thing that’s able to help them to restore their protective barrier is the Golden Fleece. So our favourite demi-gods do what they do best: They go on a dangerous quest! XD

”I thought about it. It did seem a little weird, but, I mean, doughnut shops weren’t really high on my list of sinister forces.”

I totally agree with you Percy, but what about the dangers of the sea? Sirens, hydras, a sinister sorceress, a woman with six dog heads or a sea monster that swallows entire ships? What about guinea pigs? Guess they all count as sinister forces. (Yes, even the guinea pigs! *lol*) Well, I’m pretty sure by now you all realized that Percy’s quest is rather adventurous and I admit it, even perilous. Our favourite hero wouldn’t be our favourite hero if he wouldn’t be able to circumnavigate all those lethal dangers though, (pun, totally intended! XD) and in the end …

Well, what did you expect? Did you really think I’d spoil you? *lol*
Nope, I won’t. You’ll have to find out for yourself. ;-P
I’ll only tell you as much: It was a fun ride once again and after that mean cliff-hanger I can’t wait to get a hold of the next book! =)

”Families are messy. Immortal families are eternally messy. Sometimes the best we can do is to remind each other that we’re related, for better or worse … and try to keep the maiming and killing to a minimum.” 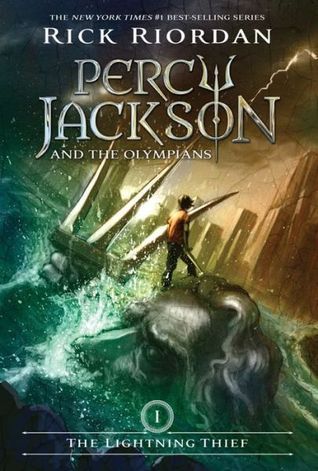 “The real world is where the monsters are.”

Believe it or not, but this was actually my first Rick Riordan book!!!

This was such an epic adventure and I loved the countless hints and references to Greek Mythology! XD Rick Riordan’s approach definitely was a more than just funny one and I couldn’t help but had to laugh out loud whenever Percy opened his mouth!
I swear that young boy is the embodiment of sass and the more I read about him, the more I got attached to this awesome boy! ❤ I want to adopt Perseus and if Poseidon doesn’t want him it’s his own fault! XD

After reading the first book I don’t really feel a connection to Annabeth, but maybe this is going to change?! She seemed to be an interesting character and I liked their easy banter, altogether she was just too reserved for my taste though, which is pretty sad because I’m more than just certain that she’s actually a very cool girl! (On a side note: I really loved that she gave Percy the nickname “Seaweed Brain”! *lol* I’m fairly certain it could have been worse! ;-P)

And Grover? Well, I guess I liked Grover as well! His habit to eat tin cans was a little unsettling but hey, I’m not going to judge him for his rather questionable diet. XD After all his heart is in the right place and when it comes down to it, this is everything that counts! ;-P I just hope he’ll survive his personal quest and I can’t help but wonder if we’re going to see him in one of the next books!

Since my jump on the “Percy Jackson” train seems to be more than just a little delayed, I finally decided to leave it at that. I guess there is really nothing I could write or say that hasn’t been said already! I mean there are actually 73.916 reviews on goodreads! (Yes, I looked it up! ;-P) So yeah, I guess that says it all! XD

If you haven’t had the pleasure to read the book yet I recommend you to do the following though:
Get a copy of “The Lightning Thief”, snuggle into your soft and comfy bed, ignore the bad autumn weather and enjoy the freaky ride! ;-P