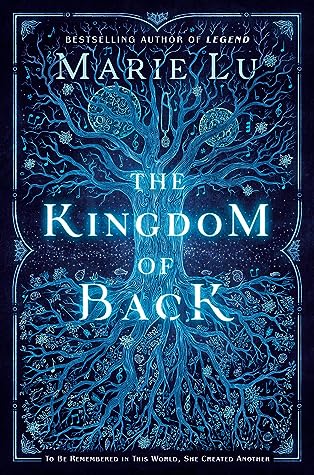 ”Music is the sound of God, Nannerl, he would say. If given the talent, it means God has chosen you as an ambassador for His voice. Your music will be as if God has given you eternal life.
My father, God … there was little difference between them to me. A frown from Papa might as well have been a frown from Heaven, for what it did to my mood.”

This story was unlike anything I ever read by Marie Lu and even though her tale about Mozart’s sister Nannerl had a couple of weaknesses I still enjoyed this beautiful book. As someone who comes from Mozart’s country and basically grew up with his legend ever since I started to think, Marie Lu certainly didn’t have it easy with me. I mean it’s always difficult to write about a topic if there’s an audience that knew about it before they were even out of their diapers. Mozart’s tale is such an integral part of our history and culture that little kids like my own already know about him and collect stickers for their sticker album. So yes, Marie Lu definitely didn’t have it easy with a critical audience like me, she did manage to capture my interest though.

His smile widened at that. He looked like he had heard every thought unspoken in my mind. “It’s immortality you seek, then,” he said. “You burn with the ambition to leave your voice in the world. You fear your father will forget about you if you cannot do this. All your life, you have ached to be seen.”

I think the fact that she only lent the characters and wove a unique story around them worked in her favour here. It’s historical fiction after all and with that in mind it was easier to overlook some of the historical facts being bent or not entirely accurate. I don’t know if Marie Lu ever visited Austria and actually went to see Mozart’s birth house in the Getreidegasse but she managed to write about it convincingly and to me it almost felt like I was there myself. (I actually was there myself so knew exactly what she wrote about) The only thing that was extremely jarring was the use of “Woferl” instead of “Wolferl”. If you look up Mozart on Wikipedia “Woferl” is mentioned as one of his nicknames but let me tell you this (and this says an Austrian who grew up with Mozart) no one over here would ever call him like that. If you talk about Mozart in Austria people will always say “Wolferl”. It comes from Wolfgang and “Wolferl” is the nickname everyone here would use. I guess Marie Lu might have used “Woferl” because it’s probably easier to pronounce for people that don’t speak German but for me, personally, it got kind of annoying. My brain always automatically corrected it to “Wolferl” and even when I reached the ending of the book I just couldn’t get over the use of this nickname. I’m not saying it’s wrong, because Wikipedia clearly states it as one of his many nicknames, none of us Austrians would ever call him like that in a conversation though. Just to get this out there into the world because correct representation is so important. I don’t know if Marie Lu’s editor or publisher ever asked a fellow Austrian to proof read this but I’m sure if any of them did they would have pointed this out to them. Well, at least I would have. 😉

”He made Woferl play so late into the night that my brother could not concentrate anymore, then slapped Woferl’s hands when he saw my brother’s eyes drooping at the clavier.”

Anyway! This out of the way we can go back to focusing on the story instead. I really loved how Marie Lu turned this into a magical tale and added so much depth to it. I mean for one we have a mysterious land named “The Kingdom of Back” in which a faerie princeling desperately tries to reclaim his throne. Hyacinth was such an interesting character because he represented so many different things. On the one hand there is his function as Nannerl’s patron and confidant and on the other hand he is a person Nannerl doesn’t really trust and is weary of. I just loved how Hyacinth had the role of conveying Nannerl’s deepest feelings and thoughts. Without Nannerl’s jealousy and resentment the faerie princeling wouldn’t have been more than a passing thought, but the more the young girl gives into her feelings the stronger he becomes. It shows in the way the Kingdom is growing and thriving and I really have to give kudos to Marie Lu for this amazing allegory. The more Nannerl resents her brother, the stronger Hyacinth becomes and once she realizes what he’s really up to its almost too late.

The thing is, nothing of it was ever Wolferl’s fault and I’m sure if their father wouldn’t have been so strict she would have never even been tempted to make that Faustian bargain with Hyacinth. What Nannerl truly wants is to be recognized for her talent and to be appreciated, but because she was a girl her father didn’t even find it necessary to give her the means to develop and evolve. While her brother gets the best tutoring and tools to improve and work on his music Nannerl has to fight for every little scrap. It was so unfair to see their different treatment but unfortunately it was a pretty realistic representation of the difference between women and men at that time. While men had all the opportunities and the world was open to them, women were only seen as future wives and mothers. Their only value in how well you were able to marry them off. Nannerl is fighting against that tooth and nail and almost breaking under the pressure.

”You and I are one, Nannerl. I am your friend. Firends help each other, and dislike seeing each other in distress. I can help you become what you want to be, help you heal, or I can let you die tonight, mourned only by your father and mother and brother. But I can only be your guardian if you let me help you. Now, what is it you want?”

Torn between what she wants for herself and what is best for her brother she is forced to make a decision and it’s definitely the hardest one she ever had to make. I just love how Marie Lu turned “The Kingdom of Back” into an extension of Nannerl’s inner turmoil, how Hyacinth represented her envy, anger and jealousy and how she’s ultimately forced to confront herself. Because in the end all that matters is if you’re able to live with the decisions you make and if you got there by yourself or if other’s forced your hand. The kingdom itself is such a beautiful place, all the potential Nannerl holds showing in every character and the unique music they emit. This was something I really loved about the book. Every single person Nannerl encounters in the kingdom has their own melody and voice and the descriptions were so lovely.

”Her touch, colder than the wind of a winter night, froze me in place. I wanted to cry out. Instead I focused myself staring at her, overwhelmed by the sound of music that came from deep in her throat. The melody flowed through her body and into my hand, wrapping itself around my skin, refusing to let go. I closed my eyes, unable to tear myself away from her.”

I swear sometimes to read this felt like the combination of a fever dream and a fairy tale. The scenes in the kingdom were an integral part of the story, yet at the same time they were few and far between. The biggest part of the narration was still playing in the real world and showed the struggle of the Mozart family while they tried to make a living of their talents. Still, the moments between Nannerl and her father always had an urgency to them and even though the story was a rather slow one you could always feel the tension in the air. Honestly, the injustice of Nannerl’s situation really got to me and it was kind of sad that the further the story progressed the harder it became for her to catch a break. Whenever she went to the Kingdom it felt like a fever dream and I didn’t know if I wanted to continue to dream on or would have rather preferred to wake up instead.

”And what if something were to happen to me? I can do everything that he can!” I had started to shout my words now. I no longer cared. “I can take care of our family! There are those in the audience who love me too, and who I can please. We are the same, Papa! Why do you not take me with you?” Papa slapped me. I gasped, suddenly dizzy, and touched my cheek with my hand.

The story might have been slow in general but it was relentless in its urgency and eventually turned into a crescendo. I don’t know if I liked the ending but I know that despite the magical nature of the story its end actually turned out to be realistic and comprehensible. Nannerl and Wolferl got older and grew up and this was reflected in the outcome of the story. Was it a good ending? I honestly don’t know, but I suppose it was at least one I could live with. So there’s that.
All told I really enjoyed “The Kingdom of Back” and ended up liking Marie Lu’s take on Mozart’s tale. If you love music, magic and fairy tales this might actually turn out to be a good pick for you. 😉