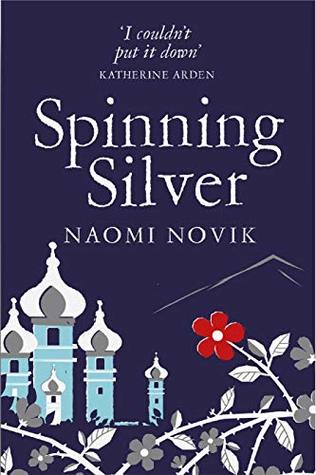 “A power claimed and challenged and thrice carried out is true; the proving makes it so.”

Do you remember those fairy tales your parents read to you when you were a kid? The Brothers Grimm kinda thing that was a little bit scary, but also had some wisdom in it and made you wonder what you would have done if you’d have been in the same situation? Well, I guess you could say Naomi Novik writes stories like that. “Spinning Silver” was my first Novik book and it definitely won’t be the last, but she’ll be one of those authors I’ll pick up when I’m in the right mood to go for one of her books. I can see why a lot of people loved this book and why others seemed to be disappointed. I honestly don’t know where I stand with this story. On the one hand I really enjoyed it and loved to be a part of this fairy tale. It was interesting enough to keep me engaged but on the other hand the ending kinda… I wouldn’t say it dragged, but it also didn’t stop at its climax. *lol*

I guess what I want to say with this is that it had some sort of… LotR kinda feeling?! Like there was an ending to the story, a climax everything and every character in the book worked towards to, but then it happened and the book just continued?! Do you get what I mean? XD For me things like that are always hard to digest, because they are kind of jarring and sort of cause the story to deflate. Aside from that I really enjoyed the story though and I had a lot of fun guessing how everything would turn out in the end.

“My mother had enough magic to give me three blessings before she died,” I said, and he instinctively bent in to hear it. “The first was wit; the second beauty, and the third—that fools should recognize neither.”

The two main characters were amazing and I really liked to follow Irina and Miryem’s story. They were both very different characters but they also were similar in some regards. I really liked that they were both strong women and tried their best to deal with the cards they were given. For a fairy tale this book addressed a lot of serious topics and we don’t only have forced marriages and anti-Semitism but also the suppression of women in a world that is dominated by men. Still, despite everything Irina and Miryem are determined to make their own way and this was awesome. Both of them didn’t have it easy and certainly expected their marriages to be different but they used their wits in order to survive and I was in awe at how well they played their cards.

It was really interesting to see how both of them got to know their husbands better and how the relationships between them changed. I personally would have liked the change to be more visible though. It was very subtle and this made it kind of difficult to believe. Of course both of them had a hard time. Miryem as well as Irina struggle with their new roles, the expectations of others and their own reality which is so different to everything everyone else sees. Still, while reading the book I always had the feeling that both women did what they did for their families and people and not for their husbands which was okay, but also not the best way to go for a believable relationship?! I’m probably the only person who sees it that way. Maybe that’s just a typical fairy tale thing?! I mean considering all the fairy tales I heard and read when I was a kid there never was a lot of emotion to it. So yeah, I guess that makes me a bean counter once again. XD

“So the fairy silver brought you a monster of fire for a husband, and me a monster of ice. We should put them in a room together and let them make us both widows.”

I think the older I get and the more books I read the more I want to feel something. A book is good when it attacks me emotionally and I guess that’s why I have troubles with some authors and their writing style lately. If it doesn’t move me, it doesn’t leave a lasting impression. I mean “Spinning Silver” was good! It was loosely based on “Rumpelstiltskin” and I obviously rated it 4 stars. I missed to be emotional invested though and that’s the reason why it didn’t get 5 stars from me. If that makes sense? Plus I had no idea why Wanda’s story line was so pronounced. She was basically the third main female character in the story but her story didn’t contribute a lot to the main plot. If it did and I missed how, please someone let me know in the comments down below. Don’t get me wrong, I really liked Wanda as a character and the close bond she had with her brothers was really lovely but there didn’t seem to be much more to her story than the huge problem with their father. If her character actually had an important function it was totally lost on me. Sorry?! I suppose I just had the feeling that her story didn’t fit in with Miryem’s and Irina’s. *shrugs*

“There are men who are wolves inside, and want to eat up other people to fill their bellies. That is what was in your house with you, all your life. But here you are with your brothers, and you are not eaten up, and there is not a wolf inside you. You have fed each other, and you kept the wolf away.”

I probably could talk even longer about “Spinning Silver” but since I’ve such a backlog of reviews already I’ll just leave it at that. XD It was a good fairy tale and I felt conflicted throughout the entire book and found myself in a real moral dilemma near the ending. I had no idea which side I pulled for and well, if you know me you also know that that’s always a good thing in my book. 😉 All told “Spinning Silver” was a very enjoyable read and I can recommend it to everyone who loves fairy tales that feature strong female characters. Happy reading!