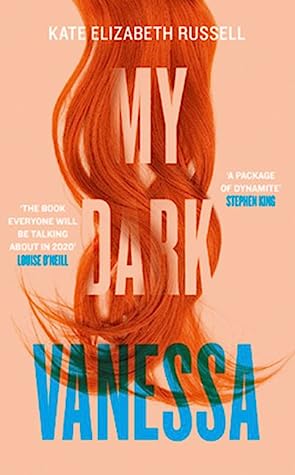 ”I loved the math of it, three times my age, how easy it was to imagine three of me fitting inside him one of me curled around his brain, another around his heart, the third turned to liquid and sliding through his veins.”

I’ve been sitting here for half an hour, staring at my screen and I still don’t know how to begin this review. “My Dark Vanessa” is certainly a controversial book and I suppose it just comes with the nature of the story and the topic that is addressed. A fifteen year old girl having an affair with her teacher is not something that’s easy to digest, especially if that mentioned teacher is three times her age as well. So what did I think about this book? Well, I’m not gonna lie, I don’t even know how I feel about “My Dark Vanessa”. Conflicted? Appalled ? Disgusted? Nauseated? Sympathetic? All of those words and so many more. I’ve an entire bandwidth of emotions when I dwell on Vanessa’s story.

”I think we’re very similar, Nessa,” he whispers. “I can tell from the way you write that you’re a dark romantic like me. You like dark things.”

What I can tell you for sure is that I hated Strane – Vanessa’s teacher and affair – with a fierce passion because he’s not only a manipulative ass, but mostly because he knew exactly what he was doing and yet he still did it. He made me so angry and I just couldn’t with him. Whenever he spoke with Vanessa, whenever they hooked up I just wanted to slap him and drag Vanessa away. And we all know that I’m a pacifist but damn the mere idea of a kid ending up in the manipulative fangs of such a vile creature like Strane – it makes me see red! >_< Every action, every single one of his words was calculated and at times I really wished I could have jumped into the book and saved Vanessa from him. I think the worst thing was that Vanessa suffered so much from the things he did to her but that she didn’t even realize it.

”Ah, working girl,” he says. “Still at that hotel, I take it.”
“I could call in.”
“No, don’t do that.” He sits back in his chair, his mood instantly darkened. I know what’s wrong; I should have jumped at his offer , said yes right away. Hesitating was a mistake, and with him, one mistake is enough to ruin the whole thing.

Even years after the happenings at Vanessa’s former school she’s still in contact with him and tries to please him and I … I just have no words for how f*cked up that is. I was horrible to see the effect all this had on Vanessa and how brainwashed she was until the very end. Strane always paints himself as the victim of their story but in fact he’s the villain and it made me feel so angry and helpless that Vanessa couldn’t see it and even felt sympathy for him.

”Listening to him, I want to cry. I see him so clearly now, understand how lonely it must be for him, wanting the wrong thing, the bad thing, while living in a world that would surely villainize him if it knew.”

What really got me was that some part of Vanessa KNEW that this was all wrong. It shows in the way how repulsed she feels by his appearance, how she is ashamed of having an affair with him, this old man that is such a constant of her life. No matter what she does, she can’t really escape him and this was at least as tragic as it was horrifying. Vanessa IS a victim even if she doesn’t see herself as one because what Strane did to her was wrong and scarred her for life. And at times she’s aware of it, she acknowledges the wrongness of it all in her private thoughts, but it’s not enough to truly drive her away from him.

”Good. That’s good.” He reaches for my hands. “You’re in charge here, Vanessa. You decide what we do.”
I wonder if he really believes that. He touched me first, said he wanted to kiss me, told me he loved me. Every first step was taken by him. I don’t feel forced, and I know I have the power to say no, but that isn’t the same as being in charge. But maybe he has to believe that. Maybe there’s a whole list of things he has to believe.”

Not even when he actually rapes her. And it was rape, everyone who thinks this book is putting a gloss on a wrong relationship like that didn’t read between the lines because for me it was plain as day that she didn’t do this willingly. Vanessa hurt and didn’t want to have sex with him, yet he still forced her to and didn’t even stop when she started to cry. That is called rape! Period. And we can tell by Vanessa’s feelings in that scene that she isn’t okay with it. That she doesn’t want it, that she wanted him to stop but just didn’t dare to do anything because she thought she owed him to have sex with her. Which is just another testimonial for how disgusting and manipulative Strane is. He doesn’t even notice she’s crying, he just goes on and ignores her reaction, he forces himself on her and is only focused on his own pleasure. I WAS SO DISGUSTED BY THIS SCENE…. I can’t even tell you how much. >_<

”I want to tell him I’m tired, to roll over and never look at the thing ever again, but that would be selfish. He said me naked is the most beautiful thing he’s ever seen. It would be cruel for me to counter that with disgust. It doesn’t matter that my skin crawls from touching him. It doesn’t matter. It’s fine. He did that to you, now you do this to him. You can handle a few minutes of this.”

Strane is a horrible, horrible person and he would have deserved to go to jail for this – or if you ask me – to end up in the fiery pits of hell. To take advantage of a 15 year old girl that has no idea what she’s getting herself into is wrong and the fact he painted himself as the victim of Vanessa’s charms just made me want to vomit. Worst thing, Vanessa believes him. For years and always suppresses the little voice in the back of her mind because she knows it was wrong but she just can’t bring herself to acknowledge the truth because then it would be real. To ignore all the others that came after her was easier than to face the bitter truth.

All told I still don’t know how I feel about “My Dark Vanessa”! For me it was a very dark, disturbing, revolting and thought-provoking book. The fact that we get to see Vanessa’s side, the side of a victim, only made me feel even more conflicted about it all. The ending… well the ending is not what I expected it to be. It’s neither a redemptive ending nor a fair one and it actually left me feeling very indignant about it. So yeah, there’s that. I guess “My Dark Vanessa” will be on my mind for quite a while…