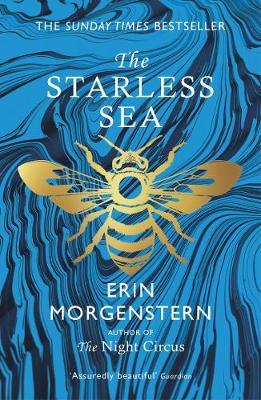 ”Far beneath the surface of the earth, hidden from the sun and the moon, upon the shores of the Starless Sea, there is a labyrinthine collection of tunnels and rooms filled with stories.”

There are stories that leave you with thousands of questions,
that cause you to topple under the sheer weight of their words.
And then there are stories that leave you with a million questions more,
but each and every single one of them feels like a soft caress.
Like a tender kiss on your longing skin. Like a shiver running through your craving mind.
You don’t want answers to those questions.
You just want to experience what they will do to you.
Which kind of emotions they will evoke, which sort of feelings they’ll drag to the surface.
You want to lose yourself in the story, dive deeper, be a part of it, touch it with your own fingertips…
Never let it go.

“The Starless Sea” is exactly this kind of story and it was an extraordinary pleasure to read it!

”A boy at the beginning of a story has no way of knowing that the story has begun.”

The boy at the beginning of this particular story is Zachary Ezra Rawlins and he’s as relatable as a reader can be. He’s a student, has a TBR he’s trying to reduce, is more comfortable reading a book than being out with his friends and was sorted into Ravenclaw. And one day he meets a mysterious storyteller who draws him into a world of wonder and mystery. Into the world of the Starless Sea.

”You are here because you wish to sail the Starless Sea and breathe the haunted air.”

The mere idea of the Starless Sea was already so intriguing and I loved to explore the Harbour. I mean some sort of labyrinthine underground library that looks like an art museum and seems to go on forever? Show me only one bookworm that wouldn’t enjoy a place like that! Also there were cats everywhere which was such a nice touch because I love all sorts of cats. Moreover there even were mysterious locked rooms and I’m such a sucker for them. I always want to know what’s behind those locked doors and my curiosity knows no boundaries. *lol* In short: I lived and breathed this story!

”You had superior meet-cutes with the others, no wonder you like them both better. You’ve cast me as a villain.”

And of course, like every story, “The Starless Sea” had a villain as well. Allegra was pretty intriguing and I think she was one of those antagonists that fascinate you. She has her principles and methods (for instance “late-night intimidation tea” – I love that term btw ;-P) and she’s convinced that her way is the only right one. It’s hard to dislike a villain like that and I found myself more and more captivated by her character and presence. Speaking of which: Dorian was such a wonderful and complex character as well.

”You’re not wearing shoes.”
“I hate shoes.”
“Hate is a strong emotion for footwear,” Zachary observes.
“Most of my emotions are strong,” Dorian responds and again Zachary doesn’t know how to reply and Dorian saves him from having to.

I just loved that boy! And the moment he got introduced into the story is definitely among my favourite bookish moments ever! It was mysterious, amazing, intriguing and shiver-inducing. Gosh how I wish I could have heard that story right from Dorian’s lips. I probably would have died. XD He sounds like a man I could easily fall for and he was described so vividly that I could imagine myself listening to his stories while taking in his appearance and gestures. He’s a character that seduces with his voice and words and up until now I didn’t even know that I’ve a weakness for men like that but apparently I do. As does Zachary. *lol* But to everyone who thinks this is going to be a love story: Be warned! This is one hell of a slow-burn and a very unconventional one at that. 😉 Also it’s not the focus of the story. This tale is more intricate and multi-layered than you might expect.

”It is there, still,” he says and pauses for so long that Zachary thinks perhaps the story has concluded but then he leans closer. “This is where the moon goes when she cannot be seen in the sky,” Dorian slowly breathes each word against Zachary’s lips.

I think I don’t want to go into more detail because this is definitely a story you’ve to experience for yourself.  Just like “The Night Circus” it’s a tale I can’t describe. You just have to read it, feel it, get immersed in it. All those stories within stories, mesmerizing dreams turning into grotesque nightmares, little pieces that merge into one story and questions that might not always be answered. Succumb to the temptation and allow the narrative to drown you in the depths of the Starless Sea. If you give yourself to the story, I can guarantee the story will give you something back. 😉