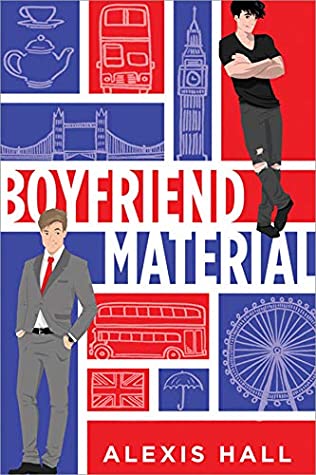 **I received an advance copy of this book from SOURCEBOOKS Casablanca and NetGalley in exchange for an honest review. All opinions are my own. Thank you so much for approving me for this ARC!**

I’m aware I rarely say this about books, but this was fantastic! Once I started to read “Boyfriend Material” I couldn’t stop anymore and with every chapter I read, I was drawn even more into the story. The conversations between the two MCs, Luc and Oliver, were so much fun and I found myself clutching the pages while laughing out loud.

Sure, not everything in this book is hilarious and Alexis Hall tackles plenty of serious topics as well. The author always does it with a little humour though and this made this a really enjoyable and entertaining read. For instance Luc’s boss is a horrible person. I mean I get it, beetles are important for the environment but boy, does she lack the finesse of human interaction. Some of the things she said at the beginning of the book were flat out rude and inappropriate and if Luc wouldn’t have been such a nice person she probably would have lost her company a long time ago.

The good thing about those moments is that they were all either called out or challenged by some of the characters and I really appreciated this approach. Alexis Hall deals with prejudices, bias and a good dose of discrimination but the author does it in a healthy kind of way. For such a funny book this is quite remarkable and before I dwell on those topics even more I’ll just go for the good stuff! Namely the easy banter of the two MCs , the fact that Luc (whose full name is Lucien btw and we all know about my weakness for that name! ;-P) is a disaster gay and the amazing portrayal of friendships which gave this all such a wholesome and healthy vibe!

“What if someone asks? I should know for verisimilitude.”
The corners of his mouth twitched slightly. “You can say I’m a gentleman and we haven’t got that far.”
“You” – I gave a thwarted sigh – “are a terrible fake boyfriend.”
“I’m building fake anticipation.”
“You’d better be fake worth it.”
“I am.”

I swear Luc and Oliver were such a formidable couple! Yes, they might have started fake-dating because at that point of their lives they both needed it to save their reputation; they were always honest and forthright though! And this was so, so, so, so refreshing!!! Most of the conflicts in “Boyfriend Material” didn’t come into being because of some miscommunication between the MCs but because the characters were used to deal with their problems on their own. They were stuck in their habits and problems and had a tough time letting anyone in, which considering both of their backstories was actually pretty relatable.

“Are we really bad at this?” I asked.
“We’ve been fake dating for three days and we’ve already fake broken up once.”
“Yes, but we fake resolved our difficulties and fake got back together, and I’m hoping it’s made us fake stronger.”

As were their friendships! I loved Bridge and the funny dynamic between Luc and his other friends. They were exactly like you’d expect good friends to be and their support for Luc was amazing! Funnily enough I even liked Alex, Luc’s gullible, innocent and totally clueless co-worker who wouldn’t even notice if he would put his foot in his mouth. Let’s just hope the Alex’s of this world will never be confronted with harsh reality. XD

This said, the only thing I didn’t like were the two storylines about Luc’s father and Oliver’s family. Whilst the plot that dealt with Luc’s father might have been dissatisfying but realistic, the part that focused on Oliver’s family fell short for me. I really wish we would have gotten more of his storyline throughout the entire book and not only on the last 30 pages. I get why Alexis Hall did it that way and I appreciate the point the author made, but for me this came out of the blue and kind of spoiled the ending. I guess this might be a typical „it’s not the book, it’s me“ situation though. Well, at least so far no other reviewer seems to have mentioned it. 😉

“I’m conscious this could be rather burdensome to hear, but you remain the thing I have most chosen for myself. The thing that’s most exclusively mine. The one thing that brings me the deepest joy.”

All told I really enjoyed “Boyfriend Material” and had a more than just tough time to put it down. The hilarious humour and easy banter made it really addicting and before I even knew it I found myself rushing through the pages. If you’re looking for a sweet rom-com that isn’t afraid to tackle a few serious topics and will make you laugh out loud, this might be exactly the right book for you! 😉 Happy reading!